Transgender Veterans? Well, Since You Asked… 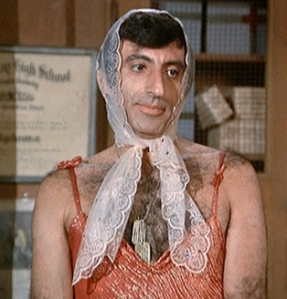 As some of you may have noticed, I have to go and put my little trans spin on every single holiday that comes up, or at least those I remember to do. This is going to be more challenging next year unless I manage to find yet another spin on some of these because my logic in many of the cases was pretty darn fuzzy at best. I might just stick to the holidays I missed the first time around, like Arbor Day, for which I’m really going to have to pull something out of my ass. In case you haven’t yet checked your calendar yet, today is Veteran’s Day. Well, or one of the days after if you don’t subscribe or religiously check this site on a daily basis.

This might shock the bejeezus out of some of you, but quite a few trans people did a stint in the armed forces. I know this conjures images of rugged troops in combat fatigues (they were called BDUs in my day, but I think it’s changed) clomping around the barracks in patent spike heels with hoochie red lipstick messily schmeared over their mouths. I assure you, it was not like that most of the time. There are enough of us though that I’ve heard running jokes about how it must be something they put in the food, much like the old salt peter rumor to eliminate unfortunately timed erections in the showers.

I know I’ve mentioned before that I did 4 years in the Air Force. My conscious reason for joining at the late age of 25, and after college graduation, was to vector over into a technology based field and secure better civilian job opportunities when I got out. It actually worked very well and I was able to hold on to that notion for a good long time. In reality, right before I sought enlistment, I was having a dilly of a time holding on to my male identity and unable to deal. I remember feeling great relief and satisfaction signing the papers and disposing of my wardrobe. Well, most of it. I took a few treasured items and sealed them in a box, within a sealed box, within a sealed box and signed all the tape with marker before giving it to a close friend for storage.

In case you haven’t guessed by now, the move failed to drive the girl out of me. All it really did was make my life super stressful because I was constantly living in fear of being found out. I came very close once. It was a rainy morning and I was returning back to the dorms after a long mid-shift (the 11 PM to 7 AM dealie) and went bounding up the slippery stairs. Right at the top my boot slid out from under me, I grabbed the rail, and my shoulder popped right out. This was the third time now by the way. It happened twice in tech school and probably should have been taken care of before this point. The problem then was that I was engaged in illicit activities at the time (drunken carousing on the San Antonio Riverwalk and attending a verboten hotel party, respectively) and wasn’t super excited about turning myself in. The previous two iterations I managed to get the thing back in on my own. This time it just wasn’t happening.

The pissed off dorm manager (this happened on Base Safety Day) called the ambulance and in the mean time my supervisor, who lived off base, happened by for reasons I’m still not clear on, and came along to the hospital. This is where I started to panic a bit. It was cold in the shop I worked in, so I took to wearing tights under my uniform and justifiably worried that this might somehow be revealed. The doctor of course wanted my shirts off immediately to look. Ugh. I tried to argue that I could undress in the bathroom, where I would have the chance to at least make sure the waistband wasn’t showing, but he wasn’t having any of that and directed the orderlies to hold me down and cut my shirt off. At that point the pain meds kicked in and I let them carry me off to the land of complete dissociation.

I don’t know if anyone actually saw anything or not. When I came to, my arm was restored to the proper configuration and there was a blanket over me. My supervisor was sitting next to the gurney grinning at me. For the sake of my peace of mind, I decided to assume no one had seen anything and let it go. After that though I decided to just be cold.

So, that’s my semi-charming little story that loosely ties in with Veteran’s day. I have many more Air Force stories, but very few of them involve anything remotely trans related. To all of you, trans or other, who served in the military, I want to say thank you for your service. If anyone is currently in the military and reads my blog because you are freaking that you figured yourself out and in one of the very worst places to deal with it, hang in there. Feel free to write me direct using the ‘Contact Michelle’ feature up at the top. Never worry, I’d sooner use a urinal again than out you, and it’s the least I can do for those who serve in a much more challenging time than my own.

I'm a transgender woman now in the maintenance stages of transition having all the electrolysis and surgery one can reasonably be expected to undertake. While busy exploring my new world, I took to blogging about it with dubiously popular results. I don't have quite as much to say as I used to, but I'm not quite done yet either.
View all posts by michellelianna »
← Yes, Ugh, I Was a Maxim “Man”
‘Hedwig and the Angry Inch’… Weird Title, Right? →