Facebook RSS Feed
← So We Have Some “Trans-generational” Differences
He Came To My House and Called Me Fat! → 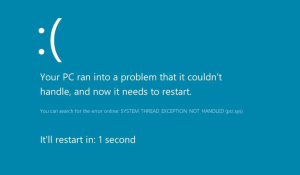 Michelle is great and all, but boy, we sure do miss Mike sometimes. This doesn’t get said aloud all that often, but it’s pretty apparent when people are thinking it, right? Welcome to Windows 8, the new roll out years and years in the making at unimaginable cost, but yet so awkward and clunky, and no one really seems to know how to interface with it. I mean you. Anyone who is undergoing, or has undergone gender transition should know exactly what I’m talking about.

There is bound to be a radical perception shift between what people always thought you were, and what you actually are now. We tell everyone that we are the exact same person inside, but now the outside just matches the inside a bit more. Nothing more than that, right? Ugh, not even close. I didn’t understand that before, but I’m finding it manifesting often enough that I finally have to admit that it’s true. My looks have changed, but so has so much more and it is bound to color the relationships I have with others. Sometimes in good ways, but in others we can’t blame people for having liked the old us just a tiny bit more.

Two weeks ago I had my mid-year performance review with my boss, and although it was generally favorable, I found myself getting emotionally defensive about one minor detail, and then as I attempted to explain, the tears started. Fuck. I can’t tell you how much that truly, truly sucked. Moreso because I was stuck in another hour long meeting with him and 3 other people directly after while sitting in the same chair I humiliated myself in moments before. Ironically, back when I was going by Mike, I used to brag that as a man, no one at work had the power to make me cry. It was true at the time, but oh how the mighty have fallen. It also occurred to me that my boss was thinking the exact same thing. Mike would have taken some constructive feedback with a big smile, a thank you, and plan to put it into action. It’s OK, I laugh about it now.

While going from stoic to emotionally volatile has changed some perceptions, some of the changes have been very positive. Believe it or not, some people actually like Windows 8 and feel it’s getting a bum rap. My relationship with other woman has changed for the most part for the better. I’m now forming friendships that are no longer tainted by the specter of that annoying opposite gender, sexual tension thing that used to make it so difficult. It’s not that I don’t still treasure my guy friends (with whom, thankfully, that awkward sexual tension thing failed to manifest), but there is only so much interest I can feign in sports, Shark Week, or “inaccuracies” in the new Superman movie. It’s nice to be treated as a female friend with no concerns that it is anything but that.

Getting down to the brass tacks, it’s OK to admit to both ourselves and others that maybe we are not still the exact same person inside. While most of the characteristics we had before certainly remain the same, our expressions of them can undergo changes. Parts of our personalities, our interests, and how we interact with others are bound to transform. Maybe not so very much, but a little, and it’s enough to be noticeable. If we can be OK with this being true, it’s a little easier to come to terms with the fact that others are going to notice as well and that some might not be overjoyed.

In the beginning of all this, so many moons ago now, I took all perceived rejections hard. I assumed immediately that some of the cooling of relations had to do with inherent prejudice of what I am; a hardening toward the same person in different clothes. I’m sure there was some of that. I’m also sure there are some who just liked me as ‘Mike’ a little better. I am different, I have grown, my focus has changed, as have some aspects of my personality. Fortunately my sense of humor hasn’t, but it’s just not enough to maintain some of the more shallow friendships. All of this is OK though, because even if some preferred the old, I’m  so much happier and contented being who I am now, and that is going to have to be enough.

I'm a transgender woman now in the maintenance stages of transition having all the electrolysis and surgery one can reasonably be expected to undertake. While busy exploring my new world, I took to blogging about it with dubiously popular results. I don't have quite as much to say as I used to, but I'm not quite done yet either.
View all posts by michellelianna »
← So We Have Some “Trans-generational” Differences
He Came To My House and Called Me Fat! →