Facebook RSS Feed
← Fosters Guy
OK, So I Was a B About the Tree… → 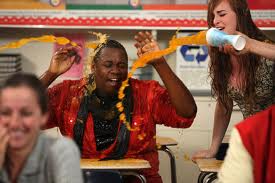 Well, it looks like they went ahead and shitcanned Unique, the first trans character on ‘Glee’. Relax everyone, this wasn’t an anti-trans thing where they quietly shoved out Alex Newell and then leaked a story to the gossip rags about “creative differences” while publically touting that he went on to pursue new opportunities. They also shitcanned the rest of the hated new class as well: Marley, Other Puck, New Quinn, and that gangly kid. Clearly they were all memorable, but none so much as Unique.

For those of you familiar with my other posts, most of them written in my young and fiery days as a newly transitioning woman, full of vim and vigor, piss and vinegar, and vitameatavegamin, I’ve gone on and on about Glee quite a bit. I was elated when they introduced Unique, had some heartache about the way they explained the character, defended her against conservative bullies like O’Reilly, but overall kept up the gushing. That was then. Now, after the fabulous 100th episode and a lackluster gay bashing very special episode, I’m somewhat incensed and want you to join me in my misery.

A quick aside, like I never do. I’m glad Ryan Murphy tackled the still very relevant topic of gay bashing. I am. But holy shit, could the show have done a shittier job of it? While I’m 100% certain this still takes place in tolerant old NYC, and probably every day, but by a couple of good old boys in a battered old pickup? I don’t think I’ve ever actually seen a pickup truck in New York City. Assuming they aren’t there on vacation, I would think it would be remarkably easy to track down these losers. Just look for the only pickup registered to Jim Bob Jethro on Manhattan and go arrest the sonofabitch. I think it’s a safe bet that it was probably him. Aside from that, even the event itself lacked the emotional depth we had long grown used to.

Remember when the show had Karofsky, the closeted gay bully who forced Kurt to change schools, then later got bullied himself by the evil leader of the Warblers and tried to commit suicide? I just described three episodes in one sentence that made me cry. Or when Kurt’s dad had the heart attack and Kurt sang to him? Or Quinn giving up her baby? Even Grilled Cheezus had more heart and he was just a sandwich. This was my thought process while the credits rolled. Glee no longer has any heart, and without heart, the apathy grows.

OK, I’m going to stop waxing nostalgic for the evil Vocal Adrenaline, lovely guidance pamphlets like “You and Your Hag, the Zizes-Puckerman romance, and guest stars with awesome names like Brian Ryan. And the slushies. Oh, the slushies. These stories are done and told. That’s fine, turn the page and life goes on. But they still had a character they could have used to inject some life back in to the show, that in my opinion, really died with the Mighty Finn. Unique still had a story to tell and huge challenges to overcome. Given the history of the show, it really wouldn’t have been all that hard to grant her early admission to NYADA and stick her in the unrealistically spacious Manhattan loft with the drearily self-involved remaining cast.

To Ryan Murphy and the writers of Glee, I thank you for the awesome work you did, especially in the area of promoting LGBT issues to the great unwashed. I think your efforts went a long way toward bringing America to the tipping point on rights and equality and no one can ever take that away from you. At the same time, you just brought your beloved platform into ‘Saved by the Bell: The College Years’ territory, or worse yet, ‘Showgirls’, and it just breaks my heart to see it. No longer unique, no longer effervescent, like a ginger ale that sat open on the counter for a good week, please, close your eyes and have a slushie on me.

I'm a transgender woman now in the maintenance stages of transition having all the electrolysis and surgery one can reasonably be expected to undertake. While busy exploring my new world, I took to blogging about it with dubiously popular results. I don't have quite as much to say as I used to, but I'm not quite done yet either.
View all posts by michellelianna »
← Fosters Guy
OK, So I Was a B About the Tree… →